Mount St. Helens is a living, outdoor laboratory. For the past three decades, scientists have learned surprising lessons about how life returns to a volcanically disturbed land and how an active volcano can be understood well enough for geologists to forecast future eruptions. The valuable science conducted at Mount St. Helens has been shared with hundreds of millions of people around the world. Geologists trained at Mount St. Helens have helped protect people from volcanic hazards in developing countries, and biologists have discovered ecological interactions never before studied. The lessons learned at Mount St. Helens have aided in the management of lands impacted by wildfire, mining, and logging. The volcano continues to teach us how life responds to a volcanic eruption and what volcanic landscapes look like after several decades of growth and change. 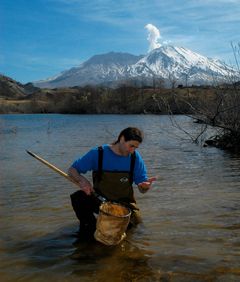 Below are links to the webpages of prominent researchers at Mount St. Helens:

In April 2008, USGS released its “A Volcano Rekindled: The Renewed Eruption of Mount St. Helens 2004-2006” (USGS Professional Paper 1750). With chapters on seismology, geology and geodesy to the logisitics of managing a volcanic landscape, there is something for both the amateur and expert volcanologist. Check it out!

According to the Cascades Volcano Observatory, From October 2004 to late January 2008, approximately 125 million cubic yards of lava erupted onto the crater floor to form a new dome.

How much lava is 125 million cubic yards?

It is enough to pave a seven-lane, three foot thick highway from New York City to Portland, Oregon. Now that is a lot of lava!