With Bill Nye the Volcano Guy 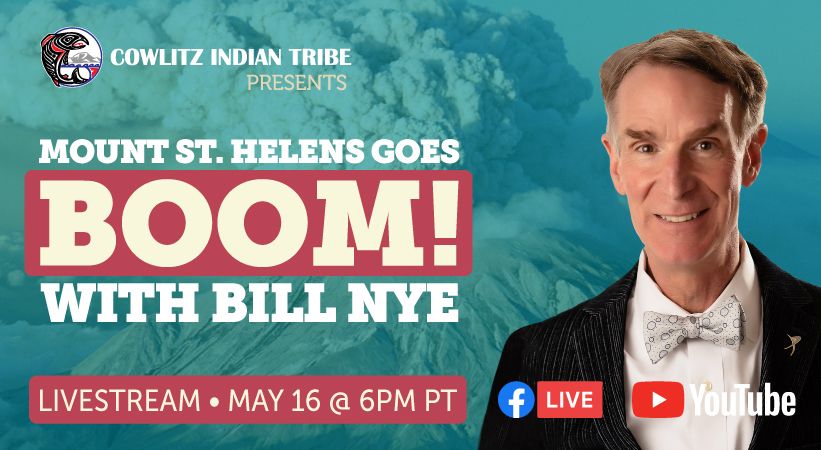 Just because we're stuck at home doesn't mean we can't move mountains. To celebrate the 40th "Eruptiversary" of the volcano, join us for 45 minutes of explosive fun with Bill Nye the Volcano Guy in conversation with Mount St. Helens Institute and KING5.

BROUGHT TO YOU BY

Bill Nye is an American science communicator, television presenter, and mechanical engineer. He is best known as the host of the PBS children's science show Bill Nye the Science Guy (1993–1998), Science Rules! with Bill Nye podcast, and for his many appearances in popular media as a science educator.

The New York Times bestselling author issues a call to arms meant to rouse everyone to become the change they want to see in the world. Whether addressing global warming, social change, or personal success, there are certain strategies that always get results: looking at the world with radical curiosity, being driven by a desire for a better future, and being willing to take the actions needed to make change a reality.


ABOUT THE MOUNT ST. HELENS INSTITUTE

The Mount St. Helens Institute, a nonprofit organization based in Amboy, WA, advances understanding and stewardship of the Earth through science, education, and exploration of volcanic landscapes.

On the 40th Eruptiversary of Mount St. Helens, Bill Nye and the Institute hope to generate more awareness about the importance of science and the meaningful work going on at the volcano through numerous science, education and stewardship programs, and how our community can get involved.