A Light for the Dark 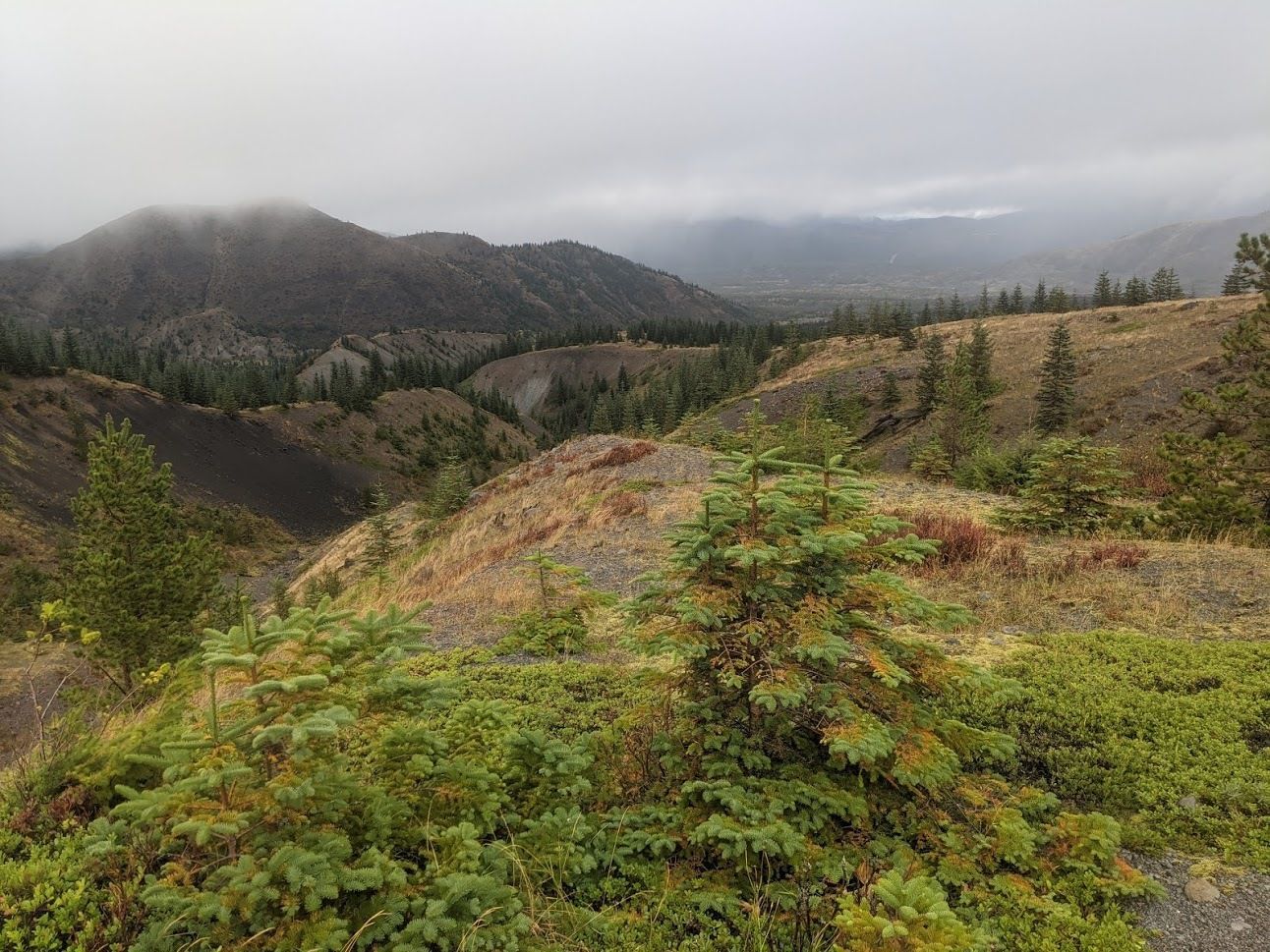 And so there came a point while ascending up the hill just past the Worm Flows Climbing Route where the profanity began to flow like wine after dinner. While seemingly a discordant moment for someone traveling in an absolutely gorgeous and remote area of the world, it must be said that at this very point I finally realized exactly what I did and I really wasn't liking it.

You would think that this outburst of uncouth language would have everything to do with the 29 miles I covered at this point, but that's not entirely true. I know well that specific feeling of tired legs and tired mind and those sensations weren't the one causing me anxiety. The real source of my feeling of anger and stupidity was the simple fact that roughly 10 hours ago I decided to not take a headlamp and now it was getting very dark very fast.

This oft-repeated maxim is pregnant with meaning, but none more so than for those who, through hubris, make their own lives more difficult by not respecting the terrain or situation. As someone who has spoken and lived those words, I absolutely know better.

In my pack I had everything for survival.

I spent the time checking all of these essentials off my list before I left.

I notified multiple people of my route and my intention. I had someone who would pick me up at the end of my run and they had instructions (and the correct phone numbers) to involve the right people after a set deadline time. I followed nearly every single dictate of safe mountain travel and leave-no-trace except for one particular item.

I did not have a headlamp.

Here I was stumbling further and further up Loowit Trail #216 with every single step taking me closer to a night time 1,000-foot descent back to Climbers Bivouac where a very worried crew awaited my return.

Right, ok, let's establish that this was not a whim that brought me to this spot. This was planned. After a year of COVID protocols correctly shutting down trail races across the world, I turned my focus toward the Timberline Trail. I was set up for a circumnavigation of Mt Hood until my training was interrupted by the horrific wildfires which were preceded by a wind event that made the Timberline Trail completely impassable due to downfall around Ramona Falls.

As a person who has a dream of doing the three great Volcano Loops of the Pacific North-West (that being Loowit, Timberline and Wonderland), I decided to pivot to Loowit. I knew the rugged beauty of the area, having helped with crewing an aid station at Elk Pass for the Bigfoot 20, as well as taking trips up to the mountain to go view the Ape Cave.

I left from Climbers Bivouac at 8:18 AM after giving the plan to my wife that I would expect to be back in roughly 7 to 8 hours.

The day began in an utter downpour.

I was completely soaked from head to toe by the time I got onto the Loowit Trail. I started clockwise and progressed into the Lava Fields. Here the rain stopped and I was blasted by icy cold wind howling down from the mountain. Thankfully, the wind dried a bit of the rain from my clothes as I hopped from one rock cairn to another.

It was roughly at 6 miles when I knew that I was moving slowly, especially by my own standards and estimation of time. In ultrarunning and trail running there are times where the nebulous "it" doesn't come together. There are moments where despite being prepared and ready, where despite 20 mile training runs in the rain with 5000 feet of climbing... "it" just doesn't come together on the day of your run. And this... was one of those days for me. Every single thing was just slow, on this day. 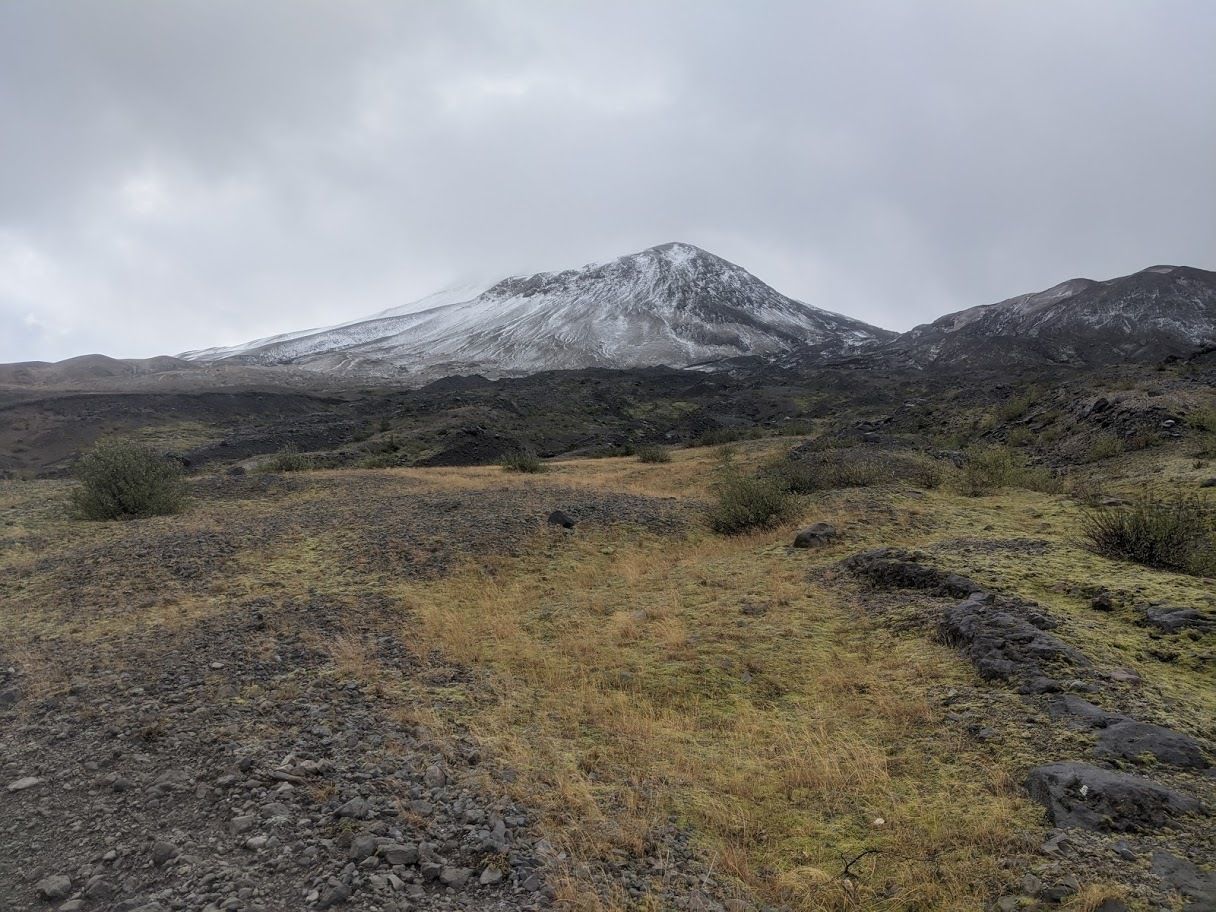 The Loowit Trail demands your attention as all great routes do in their own way. Prior to the run I consumed trip reports, videos, routes, maps and information on what to look out for as there is a wealth of information online. As someone touching the trail for the first time ever, I developed an immediate respect for the Lava Fields, the precipitous descents, the rope lines in and out of the gullies, and the beauty of the area.

Finally, I was settled into the trail. As I moved slowly toward Studebaker Ridge, I found myself enjoying the bleak day.

Every kind of October weather was on display from rain to wind to snow. Entering the second 10 miles of the trail there was even a little reprieve and almost some sun. The mountain, covered in snow and imperious, revealed herself to me as I loped along the trail by myself. Having the time and the privilege to take this moment by myself was not lost upon me as I bathed in the luxurious nature of the desolate landscape. Due to the weather, I stopped to take precious few pictures as I was forced to store many of the memories of the magnificent Loowit Trail in my mind. The curve of the unending trail hiccupped over ridges and rocks as it stretched through high alpine meadows.

It was impossible to not enjoy the desolate beauty of the trail when I forded a roiling Loowit Creek, looked upon the brown blasting spasm of Lower Loowit Falls and then latched onto the climb up to Windy Pass. On this side of the mountain, it was biting cold, howling wind and lonely in the best way. The area here is pure adventure in every form. After crossing over Windy Pass and descending to Abraham Trail I was able to move along towards Pumice Butte with the accompanying groups of mountain goats. With my heavy footfalls pattering away underneath the endless wind it became obvious at this point that I would be finishing in the dark. If there's one thing my experience in skiing, hiking, running and camping in the mountains has taught me it is that you should always self-extract if at all humanly possible. Being in the backcountry means that you must depend upon yourself and you must find a way. Now, the best advice to follow is that if you are lost that you should stop, evaluate your situation, return to a known area if possible and/or wait for rescue without making the situation worse. However, I wasn't lost, I wasn't injured, I wasn't unable to finish, I was just moving slow and without a light source.

So, I pushed on up the climb, fully aware of the time, with my legs pumping, lungs burning, breath cursing, eyes focused on one step in front of the other and trying to utilize every sense that I had to avoid tripping in the glowering and deepening night.

When I made it to the descent down Ptarmigan Ridge, I was filled with a very fleeting happiness at completing the loop as I looked into utter darkness that blanketed the trail below. This is where the mind fights against itself and despairs. There is only one thing to do and that is full commitment. There is only getting back. After 31.5 miles I would not be stopped getting back to the car and the people who waited for me with such love and anxiety.

I took stock of what I had upon me and decided that I could get the best possible light from my watch. So, I took off my watch, turned on the backlight glow function and used that light function held close to the ground to navigate my way down.  Every twist and every turn in the trail seemed to lie that I was wrong, but I had a digital version of the trail pre-loaded to my watch to guide me if needed. As well, I picked out specific things to remember on the way up which further confirmed I was heading in the right direction when I came upon them in the dark on the way down. I couldn't always rely on my eyes, so I relied on my ears. I could hear the trail underfoot and that continually told me that I was heading in the right direction.

My adventurous descent was finally ended by two trail runners with headlamps that were sent in the right direction by my now very worried wife as their twin beams of light helped me descend the rest of the trail with ease.  I am eternally grateful for their assistance.

I touched down at the car after 11 hours and 47 minutes having completed the loop 4 to 5 hours longer than I expected. After a round of expressed gratitude to those who helped and a huge mea culpa to my wife and daughter, we headed home.

Life teaches us lessons all the time if we are willing to listen. This was my lesson that reinforced something that I should know which is that you should be prepared for every possibility when you are dealing with the mountains and the wilderness. Getting out into the wilderness is one of the best classrooms you can have, provided you ensure that you ensure that you can leave the classroom alive. I've gotten comfortable, intentionally, traveling through remote areas, but all that experience doesn't matter if you put yourself in a bad situation when it isn't necessary.

My take away from the Loowit Trail is a deep love of the trail and the area. It's not even been a week and I am planning on doing the loop again during the summer, preferably under a hot sun.  I'm imagining the ascent back up to Windy Pass with the entirety of the backside of the mountain stretching out below you and the limitless trail winding down, around and out of sight. I'm imagining the ropes in the ravines and running alongside the ridge with the birds as they glide on the buffeting winds. Save & Close

And I can imagine a longer, multi-day trip with my family with that peaceful time of camping and hiking on the mountain when my daughter is old enough to cover the distance. I can imagine all these things because I made it back.

It may be 4 hours longer than I hoped, but I don't regret the amount of time I spent on the trail. I'm just going to ensure that next time I'll bring a light for the dark. 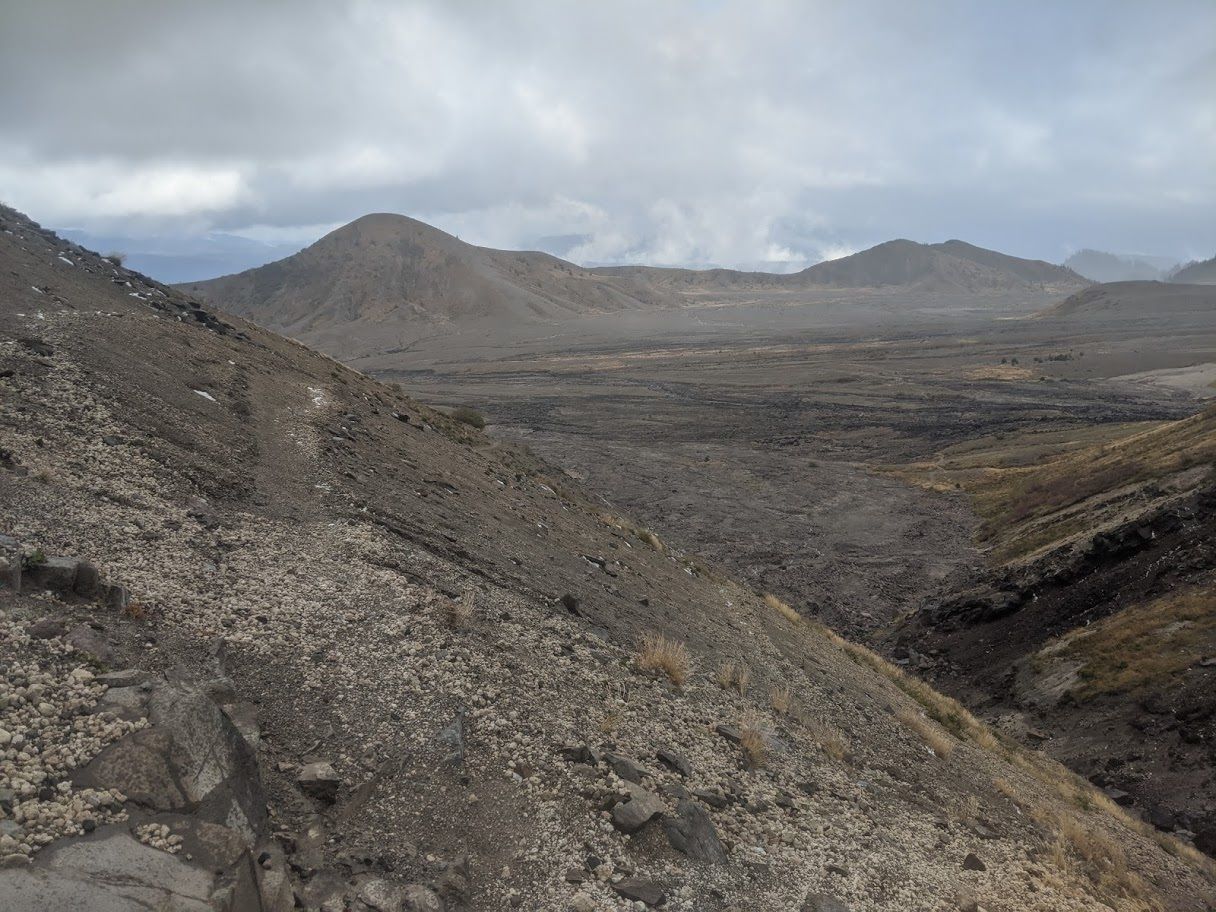